It is with great difficulty that the VFUA wishes to advise former VFL umpire and observer Greg Sidebottom has tragically passed away.

Doing what he loved most, umpiring football, Greg suffered a cardiac arrest while umpiring in the country football match between Ardmona and Undera football clubs at Ardmona reserve. 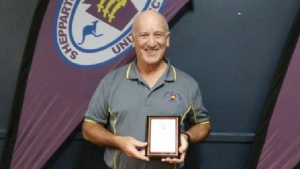 Greg was a Senior VFL Observer and a person who was passionate, engaging and was always smiling. Greg always told umpires to ‘Have fun and enjoy the game’, which reflected the way he umpired his football and lived his life.

All umpires in the VFL and TAC Cup Competitions will wear black arm bands this weekend to remember him.

Greg was a life member of the AFLUA where he was awarded Heritage number 298.

Our deepest condolences go out to his family and friends.