The Annual Ball was again held at the Lincoln on Toorak on Thursday, 28 September 2017. Becoming tradition, the night was again hosted by Channel 7 Sports Commentator, Jason Bennett – Jason hosted a likely record attendance with 138 members and guests in attendance. The youngest being President Michael Curtis’s, three-month old son.

The night kicked on with a captivating interview and recognition of VFUA legends Peter Kelly (PK), David Flegg (Fleggy) and Jamie Grindal whilst asking the tough questions was the best dressed (in his opinion) Vice President, Nick Brown. All in attendance were given the opportunity to recognise the contribution of these gentlemen whilst also hearing a few humorous little known facts.

Breaking up the night with a few giggles was footage of the Grand Final After Party which included ‘Roaming Butch’. Much to the satisfaction of all in attendance this segment demonstrated a few stumbling and slurring umpires who had likely already forgotten who had actually won the Grand Final that same day.

Finally the night offered a final congratulations to all Grand Final umpires, particularly those umpires who officiated the VFL Grand Final.

The VFUA Ball, as always, provided the final closure and celebration of yet another football season. A big thank you and congratulations to all 2017 VFUA members – 2017 saw big lists, new squads and new memories!

A special thank you to Daniel Butcher and Nick Brown who together planned and executed the night to ensure an enjoyable and engaging evening – THANK YOU!! 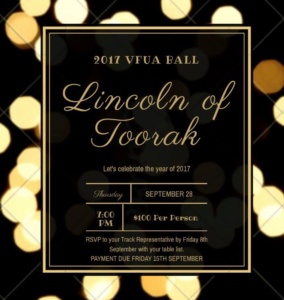