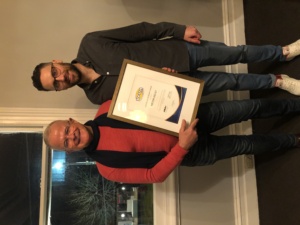 The words on the Lifetime Achievement Award presented to Peter Kelly at the 2021 VFUA Life Members Dinner capture the essence of his vast contribution:

A man whose passion for umpiring has changed the game. This award celebrates his extraordinary contribution and lifetime commitment to the umpiring profession and the association since its inception.

But what of the detail; and details were always part of the way PK conducted business – endless details.
The VFUA was formed in 1992 and began work for the 1993 season as the Victorian State Football League Umpires’ Association – Social Secretary, Peter Kelly.

In the following years PK and his committees organised 5-6 events per year from the UPD to variety nights to the grand final dinner dances. These events were also run for the AFLUA and catered for upwards of 350 attendees at the ball.  Taking on the role of both treasurer and social secretary in 1994 he was instrumental in the change of structure of the association from 1995 when he became VFUA administrator and later executive officer.

As 1996 President Greg Kennedy noted “My greatest recollection of PK during my time as president, was I never once had to worry about anything administrative. The VFUA was only a few years old and it was new ground we were breaking. Peter was instrumental in the formation of this great group”.

As administrator much fell into PK’s purview. Dealing with the VFL administration, usually in the form of Kevin Mitchell could be challenging but PK developed a process to deal with Mitch, his reactions and the sometimes concerning liberties or directions the VFL wanted to take with its umpires.

It was an indication of 2006-07 President, Rob Findlay’s thoughts that “PKs greatest asset is his ability to develop fantastic relationships with people across a broad spectrum. PK’s experience in human resources certainly put him in the box seat for drafting policies and initiatives in advance of the VFL: heat policy, formalised selection policies, extensive contributions to fees and condition arrangements, the biennial VFUA survey and he was also never far away from social events as either having some part in planning or as an enthusiastic participant.

And it was not just the VFUA as an organisation that benefitted from his involvement. Two former presidents both reflected what the association and individuals received:

I loved working with PK and learnt a lot. There was never anything left to chance. He thought of everything and he is the single reason why our Association is in such good order today. Presidents and Executive members come and go. This can have a topsy turvy effect on any Association. However, PK has been the rock. The strategy has never diverted and each year the conditions for umpires in the VFL get better and better. Umpires are respected more and the powers that be at Football Victoria have a greater understanding of who we are and what we want to achieve. Why – because one man has had a single vision. That vision has been to ensure that every umpire has the best possible chance to succeed and that they are well looked after by a professional organisation whilst they are a member (Russell Davidson, 1999)

If PK had not taken the VFUA by the reins who knows where it may have ended up. His passion, dedication and certainly commitment to his roles, the Executive Officer position, show what type of person PK is. He has assisted a lot of people, including myself with their leadership skills and developed some fantastic role models for up and coming umpires. He has done all this whilst most importantly having fun (Adam Wojcik, 2007)

VFUA matters were never far from his mind regardless of location. Richard Mills recruitment as president was one example.

“In my time on the list PK was always present at functions (drink in hand!) mixing with and welcoming everyone that came along. I used to run into PK at any one of the many MCC bar’s on grand final day each year and we would have a chat. One year the conversation turned into an invitation to run for presidency of the association – an invitation I took up. Without having been on the executive before – it was always going to be a big challenge. PK was there right the way though, always a constant support.”

And let us not forget that PK was also a 36-match AFL goal umpire in the early days of the then VSFLUA and had contributed to the AFLUA on the Social Committee in 1989 and as Social Secretary in 1992 before that role was merged with the VSFLUA. He was also Penguin Vic while working at the Department of Tourism, being aptly cast through both stature and likeability.

Also, he contributed to the administration of the Southern Football League umpires (now SFNL) and Southern Umpires Association at various times during his VFUA tenure

Currently working in a part-time role with the AFLUA it’s a pretty full working life following his retirement from the Victorian public service – although they will be noting a large drop in the photocopying and printing costs in the last few years.

Peter Kelly leaves VFUA office having after 29 of outstanding service he has taken the association from infancy to maturity such that it was recognised as the bargaining agent for the new VFL competition incorporating umpires from NSW and Queensland.

He remains as life member, Special Award and Lifetime Achievement Award recipient and respected among the association Executive Committees with which he has worked and by the generations of umpires he has served.

“A man whose passion for umpiring has changed the game”