Furthermore, the Mini Olympics is run in aid of a good cause – as much as Andrew Talbot would like to argue the worthiness of adding silverware to the New England Patriots’ trophy cabinet. 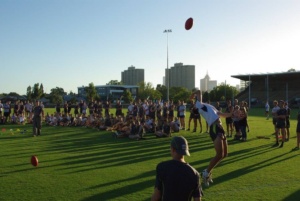 A gorgeous late February evening greeted us at Vic Park, with conditions resembling those at Trump’s Inauguration (in Trump’s opinion at least). With the Vic Park surface also resembling Stawell’s Central Park, the stage was set for the traditional first event – the 4 x 200-metre relay. Despite the goalies attempting to offset their 3-second head start with Cyrus Wong going shoeless, Josh Forner’s VAL pedigree and boom recruit Nick Steel, the other disciplines yet again gobbled them up more quickly than the offerings from the BBQ, with the Development Boundaries taking gold. Rumours of Usain Bolt trialling between the sticks next year are yet to be substantiated.

As the soccer then commenced concurrently with the push-ups & sit-ups, the less sloppy rigs of the fieldies and boundaries again proved the difference, with the goalies sorely missing the exploits of Peter ‘Barrel Boy’ Nastasi (who’d reportedly been brought to the VFL primarily for these events). With the Development Boundaries streeting the field to win the push-ups, Simon Blight and Lokky Harty took out the sit-ups for the Senior Boundaries. 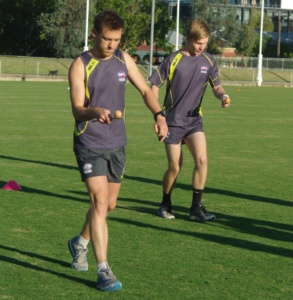 To the soccer field, with the flares having been confiscated and crowd trouble dealt with, the Development Boundaries looked to build on their good start by drawing inspiration from Leicester City. However, they seemed to read from the Foxes’ 2017 playbook – unlike the Senior Fieldies, who channelled the Leicester of 2016 to take out the soccer undefeated and without conceding a goal. The Senior Fieldies also prevailed in the egg and spoon race, with E&S veteran Tyler Hankinson holding off a concerted challenge from Jackson ‘The Package’ Griffiths of the Goalies.

As everyone then assembled for the evening’s final events, Johnny Summers, with thumb turned up or down, determined the fate of the gladiators partaking in the boundary throw-in contest. The Senior Boundaries brought out the big guns for their pet event but, with Damien Main’s throw-ins landing in Richmond, the Development Fieldies emerged from the arena the victors. 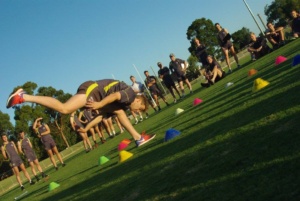 To the traditional and ever-entertaining final event of the evening, the bouncing, it was a tightly-fought contest. Despite the Senior Fieldies’ Aaron Langdon landing three perfect bounces, the spoils were shared by the Goalies, Development Boundaries and the Development Fieldies (Team B).

However, the Senior Fieldies’ performances in other events saw them take the Paul Anderson Memorial Shield for 2017, despite allegations of rigging by Andrew Talbot, who was making his Mini Olympics scoring debut. #FakeNews #AlternativeFacts 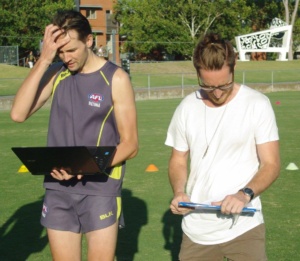 1.5 points behind in second were the Development Fieldies (Team A), a further 3.5 points back were the Development Boundaries in third – and, epitomising the Olympic ideal of the struggle being more important than the triumph, the Goalies came last yet again. (They’re reportedly lobbying for a sausage-eating contest next year).

On a more serious note, the Mini Olympics wouldn’t happen every year without the organisation and hard work behind the scenes of the VFUA executive, which is ably assisted during the event itself by AFL Victoria (venue, trainers, drinks), as well as umpires and coaches (refereeing, scoring). 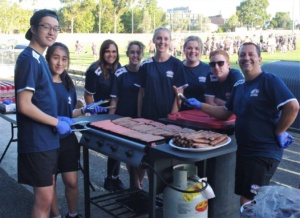 More importantly, however – indeed, most importantly – the VFUA community enjoys this evening in honour of Paul Anderson. As enjoyable as the Mini Olympics always are, the VFUA community should always remember that its priority is to uphold the Association’s ongoing financial support of Cancer Council Victoria, which works to prevent tragedies like the one that happened to the Anderson family.

Paul Anderson was a VFL umpire, in the prime of his life, doing the same things that today’s umpires do and with loved ones like today’s same umpires. Although today’s umpires wouldn’t have known Paul personally, the Mini Olympics is a yearly reminder that umpires are indeed a football team – a sentiment which, in the case of the VFUA and the Anderson family, goes beyond the football field and spans generations. 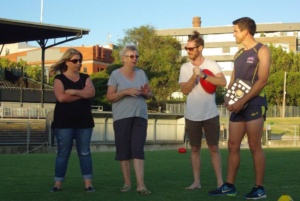 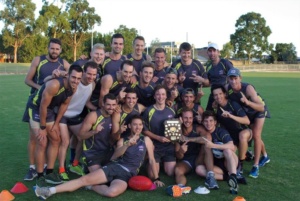