Eight teams, representing eight AFL clubs from across the country came together for an incredible eight-week season. Although eight weeks may have seemed like a short time, the AFLW competition was jam packed with big marks, big tackles and big goals, and finished with an epic Grand Final.

For the eight VFL field umpires chosen to umpire the inaugural season, it was unlike anything we had experienced before. The excitement for AFLW was huge before the season had even started, but no one really knew what to expect, not even the umpires. We knew that it would be a step up from the VFL Women’s competition and that we’d be umpiring players we knew little about. However, we didn’t know how big (or small) the crowds would be, how the different rules would impact the game or who the favourites were to win the flag. It was all new territory. 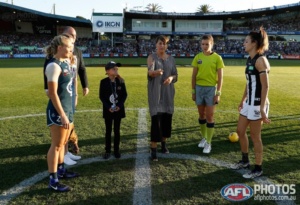 But the crowds came. Nearly 25,000 people squeezed into Ikon Park to see the first ever AFLW match against traditional ‘arch rivals’ Carlton and Collingwood. Carlton won and Darcy Vescio became a household name overnight. I was lucky enough to umpire the first Saturday night game at Whitten Oval; Western Bulldogs’ first game against Fremantle. The atmosphere was electric and the crowd of 15,000 cheered at every hit, kick, handball and goal.

This was footy in February and the people were loving it. And so were we!

Over 50,000 spectators turned up in the first round alone. Catching glimpses of the crowds during the games, it was easy to tell that this was a different AFL crowd. There was a sea of families lining the fences of the ground, young boys and girls waiting for their new favourite player to come onto the ground and to maybe even get a picture with her after the game. It felt more like grassroots local footy than the highly glamorised AFL. But there was a hint of glamour. 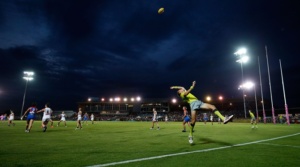 Every single game was televised so as umpires we had to remember this. We had to wait for the ads to finish before we could throw the ball up after a goal. A flashing light would signal that we were ‘on air’ again. The field umpires were given communication vests to wear throughout the games. These were invaluable as we were able to communicate with one another on the field. We could also give each other advice and encouragement as the game went on. With these vests on, we felt like real AFL umpires.

We were certainly treated like real AFL umpires on and off the field. Each week throughout the season we had an online coaching session with our coaches Adam Davis and Heath Ryan, along with the interstate AFLW field umpires. In these sessions we went through vision from AFL or AFLW games that showed our strengths or areas in which we could improve. Our own personal feedback from Adam and Heath after each game was also very thorough and valuable to our development as umpires. Being involved in AFLW has enabled all the umpires to see the professionalism and precision that is required at AFL level. It has shown us what it takes to umpire in the AFL and what things we can expect if we reach that level. It has been an opportunity that we have all grasped with two hands and I know I feel very grateful to have umpired in the AFLW competition.

Although the AFLW season was short, it has changed the Australian sporting landscape forever. The opportunities that it has created are endless. Where once a young girl only saw men playing or umpiring at the highest level, she can now see the many women involved at the highest level of AFLW. She has role models just like her to look up to and to aspire to if she chooses. Representation plays a key role in the ability to achieve our goals. When we are able to see someone like us achieving, then we are more likely to thrive to do the same. This is what AFLW has done for thousands of young women and girls across the country.

Historically, women have been encouraged or forced into sports that are traditionally less ‘aggressive’ or ‘rough’. They’ve even not continued sport at all. But AFLW has shown that women are not afraid to get their hands dirty or to put their bodies on the line for their teams. The stereotypes of what women are able to do has and will continue to change as we see more women taking to the sporting field and particularly the footy field.

But the real highlight of the AFLW competition has been the personalities that we’ve met along the way. I’ve been able to meet incredibly talented umpires from all across Australia, striving to be the best umpires they can be. 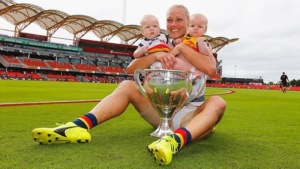 We’ve also seen players like Sarah Perkins, overlooked in the draft, shine in the AFLW season and become a premiership player. We’ve seen the Kearney-Blackburn combo for the Doggies just like we see the Selwood-Dangerfield combo for the Cats. We’ve seen Erin Phillips absolutely tear the competition apart with her strength and athletic ability. And we’ve seen a police officer guide the Adelaide Crows to become the first ever AFLW Premiers.

It is often the people that make things great and the AFLW competition has been no different. The umpires, players, coaches, officials and the fans have helped make AFLW a success. The future of women’s footy is in great hands and I can’t wait to see what season 2018 and beyond holds for the game. It’s only going to get bigger and better from here. 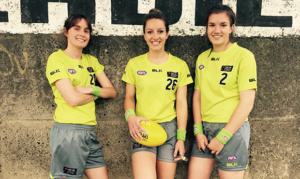