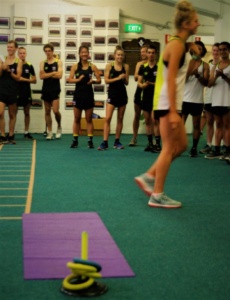 The Paul Anderson Mini-Olympics has now been running for over 15 years. This year as usual it took place on a Thursday afternoon as a replacement for normal pre-season training (a break from pre-season training is always welcomed by all!), on the 22nd of February 2018. It pits all six squads against each other (field, boundary and goal, split up into development and senior teams) to prove who is really the best-on-ground at Victoria Park.

This year, it kicked off with two never-before-seen events held inside the training rooms: football Hacky Sack and quoits. Quoits was a huge success, with scorer Andrew Talbot (back again after accusations of cheating in 2017) confirming at the end of the event that it was in fact a tie for first! Greta Miller, after successfully landing 5 shots in a row during regulation, stepped up again for the development boundaries in the tiebreak defeating Annie Mirabile (senior field).

Now it was time for the controversial new handicap system for the 4 x 200m relay to be put to the test! Development 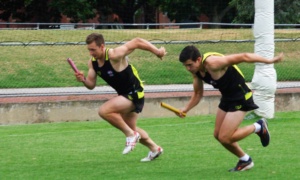 boundaries were strong favourites early to go back-to-back in this event after recruiting Matt Crowley over the off-season, who is rumoured to be the progeny of a fifth place 1500m finisher at the Olympics. Intrigue surrounded the dropping of the baton by Lachlan Floyd (development field) who alleged Blake Anderson (development boundary) deliberately knocked it out of his flailing arms. In the end it was an extremely tight finish with senior field taking the gold after a heroic diving effort over the line from anchor Patrick Burns.

Perennial favourite soccer was next, running in conjunction with yet another new event: goal kicking. Despite losses in their first three games, a parochial crowd supporting the development field umpires erupted after Cameron Watts netted a winner in game 4. Unfortunately for them you don’t win the Mini-Olympics for having the loudest supporters, with the senior fieldies taking out the soccer competition. The goal kicking event saw Dean Jones take advantage of no shot clock, adopting the Ahmed Saad run up and leading the senior goal umpires to victory.

Tradition now saw everyone gather in a ring to observe the final two events of the night: the boundary throw-in and bounce. Fortunately

for the senior field umpires, no squad was able to score maximum points in either of these events, and the Paul Anderson Shield was awarded to them for the second year running.

Following the events it was great to see everyone grab a snag (or 7 as in the case of senior boundary umpire Tom Horsten!) and come together in memory of Paul Anderson, a VFL umpire who lost his battle with cancer in 2001. The night raised over $1,200 for the Cancer Council.

A thank you must now go out to the VFUA executive team for organising the event, as well as to AFL Victoria who have supported this event from the very beginning – happily helping out with set-up, BBQ, refereeing of events as well as allowing us to have a training night to stage the event.

The support we receive from the Anderson family who have attended EVERY year since the event was named in honour of Paul is remarkable and testimony to the effect that his life and struggle against cancer had on so many friends and family.

See you all next year!