Simon joined the VFL in 2011 from the Eastern Football League. From the outset, Simon was a very promising umpiring and this was reiterated by winning the Leigh Keen coaches award in his first year. After one year on the development list Simon quickly progressed to the senior list and has had an incredible career since.

Simon’s stats whilst at the VFL:

Simon is described by his colleagues as determined, humble, hard working, quiet achiever, no fuss and committed umpire. It has not been all highs and smooth sailing for Simon. His 2016 season started well with his appointment to the state match, but that turned out to be his last game for the year. Simon ruptured his ACL the week after and had to undergo surgery, ending his season. Despite his crippling injury and disappointment, Simon continued attending training and coached skills sessions to support his fellow goal umpires. Simon wasn’t able to run again until the end of 2016, and had only a few months to get his fitness and confidence back before the 2017 season. But he did just that and was back umpiring senior footy in Round 3.

Simon notched up his 150th VFL game in style umpiring the preliminary final between Richmond and Port Melbourne. When it comes to finals, Simon is one of the most experienced finals umpires. His game on the week was his 20thVFL final putting him 2ndoverall for most finals by an umpire within the VFL. The good news continued for Simon this week being appointed to his 4thVFL grand final on Sunday between Richmond and Williamstown. After this weekend Simon will join Peter Balding on top of the leader board with 21 VFL finals.

Congratulation Simon on the massive achievement! 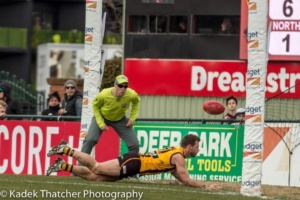