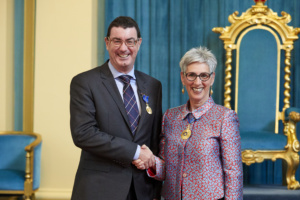 Former VFL/AFL Goal Umpire, AFLUA Historian & VFUA Statistician David Flegg was presented with an Australian Medal for his services to umpiring by the Hon. Linda Dessau AC, Governor of Victoria at Government House on Friday 20 September 2019.

David’s contribution to the Australian Football League Umpires’ Association (AFLUA), Victorian Football Umpires’ Association (VFUA) and umpiring for 37 years has been profound. Most of his work off-field has been done in an honorary or voluntary capacity – he has donated years of his life to both Associations.  He has done this whilst maintaining full-time employment as a research librarian with a number of government organisations.

But it is not the accumulation of records and researching and recording the history of umpiring that makes David a special person.  It is his passion and genuine care and interest in the tradition and history of umpiring as well as in umpiring and umpires.  He is a mentor to young umpires, a genuine role model to current umpires and respected amongst the umpiring fraternity as one of the all-time contributors to umpiring in Australia.

As can be seen from the umpires’ association positions held and his achievements, David’s contribution to the AFLUA and VFUA and indeed AFL and VFL umpiring in general, has been truly outstanding. A summary of David’s voluntary positions can be viewed by clicking here

On behalf of the VFUA, congratulations David on this great honour in recognition of your valuable contribution over so many years.  May it continue for many years to come.