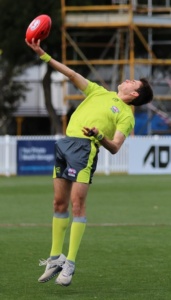 The Best First Year Umpire Awards had been presented at the VFUA Ball in September: Shamus Dundon (F), Corey Malcolm (B) and Thomas Gath (G) were the nominees for the The Frank Leverett Shield. Awarded to the best overall first year umpire, Corey Malcolm was selected to receive the FLS for 2019

Most Improved for each of the senior squads were as follows: