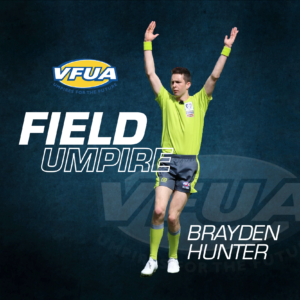 SUA – started off with the U/18’s as a boundary umpire. Did two years of boundary umpiring and decided it was too much running, so switched to the field.

What made you take up umpiring?

Playing U/13’s footy, and started to realise I was no good. My coach at the time was an umpire, told me to come down, and it went from there. Bit of extra money also helped.

Round 12 2019 – VFL seniors debut. Coburg vs Casey. Loved how the Coburg supporters were all leaning over the fence giving me some “advice”, back to what it was like at local league. Very different to an U/18’s game where the crowd consists almost solely of parents. It was a good game all day, also remember that the whole ground was covered in almost ankle-deep mud.

This came two games later, tripped over my own feet on the wing at Frankston, and the crowd were having a lovely time reminding me about it. The crowd was already pretty excited, being a Frankston vs Coburg game.

Most influential coach/mentor in umpiring?

Peter Marshall. He wasn’t scared to give you blunt and honest feed-back, but on the flip-side, he was the first to give you a pat on the back when you did something well. Really made me believe in myself, particularly as a younger umpire.

Best advice given to you early on in your career?

This is a tough one because there are so many. But I will settle on Lachlan Floyd. This bloke travels 3 hours to and from training every Tuesday and Thursday night coming from Sale, his commitment is second to none. Additionally, he is the life of the room and creates the best culture I have seen.

What do you like most about being an umpire?

The team environment. Being out there in the moment, best seat in the house.

What can you not go without doing on match day?

Pre-game coffee, 2.5 hours before the game. It has to be done.

What’s your best sporting experience outside of footy?

2 junior cricket grand finals. I also didn’t mind throwing down some left-arm chinamans in the 4’s at Casey South Melbourne.

Diesel mechanic at the CFA, which involves repairing and maintaining fire trucks across Victoria. I’ve travelled to NSW and East Gippsland in the peak bushfire seasons, it’s hard yakka but rewarding.

I can’t remember the last movie I watched, I usually fall asleep.

Most admired person, why?

My Grandma. She had a stroke almost 20 years ago, and has lived 20 years without movement of the right side of the body. Despite all this, I’ve never heard her complain, and it’s this gritty determination that I really admire.