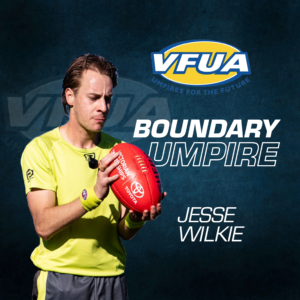 First started umpiring with?
Riddell Umpires
What made you take up umpiring?
I had a pretty nasty head injury (not football related). Wanted to stay involved in footy so I started umpiring.
Career highs or lows?
High: Umpiring in an AFLW grand final.
Lows: The early morning starts where they are scraping the ice off the ground before the game starts. One particular match in Werribee comes to mind.
Most memorable umpiring moment
Two in particular stand out: I got to run around on what was then Etihad stadium with some absolute legends of the game during filming of Foxtel’s ‘the recruit.’
Pretty tough to top the last two minutes of the first AFLW grand final, tight finish with a great atmosphere.
Most forgettable umpiring moment?
I failed to pack a whistle before departing to the Gold Coast for the U16 champs.
Most influential coach/mentor in umpiring?
One decision from a coach has had a huge influence on my umpiring.
Having umpired the Senior RDFL grand final in 2013, Cameron Black didn’t select me for the senior RDFL grand final in 2014, whilst it hurt at the time I definitely have to thank Blacky for this as it acted as a big motivator in subsequent seasons.
Best advice given to you early on in your career?
Pump your arms – Thomo
Most influential fellow umpiring peer?
Kyle Fisher started down at local league a year or two before myself, in my first year i tried to emulate his previous season, then the next season i wanted to be able to match it with him.
What do you like most about being an umpire?
There are so many great benefits, can’t knock the experiences I have been given along the journey, namely the national U16 carnival on the gold coast.
What can you not go without doing on match day?
No real superstitions but I like to listen to The Howie Games on my way to a game.
Favourite sport besides footy?
Golf
What’s your best sporting experience outside of footy?
Standing front row of the crowd for Winx’s fourth Cox Plate was pretty special.
Watching Adam Scott win the Masters (on TV) was also a highlight.
What are the benefits of being a VFUA member?
The VFUA does a great job of keeping members informed, especially in current times with so much uncertainty. They provide the opportunity to celebrate the season at the VFUA ball and the whole team are willing to work so hard for all members.
What’s your occupation/day-job?
Container Control/ISO Tank Surveyor
Favourite food?
Crumbed lamb cutlets.
Favourite movie?
Happy Gilmore
3 people you’d like to have dinner with?
James Hird, Sally Fitzgibbons and Brendon Gale
Favourite holiday destination
Every good holiday has a beach, Torquay and the Gold Coast are regulars.
Most admired person, why?
It’s too difficult to pick just one, they don’t have a public profile but RW, DR, GC and CC have had huge influences on my life and I often look at them in admiration for their work ethic and demeanour.