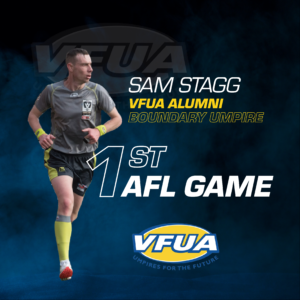 No-one could have anticipated umpiring your first AFL game in an empty stadium, but these are strange times indeed.

Sam Stagg’s career started with the Bendigo Umpires’ Association where he umpired the 2011 Loddon Valley Senior Grand Final and then went on to umpire the 2012 and 2013 Bendigo Football Grand Finals.

These appointments led to Sam moving to the VFL, where he started in 2014.  Living in Bendigo meant that Sam commuted by train from Bendigo to Melbourne twice a week to attend training at Victoria Park, leaving home at 2.30pm and arriving home at 10.15pm.

Sam’s commitment and fitness paid off with him experiencing one of his career highlights in umpiring the 2019 VFL Grand Final as well as being recognised as the VFL’s Boundary Umpire of the Year.  Sam was subsequently appointed to the AFL list and umpired his first AFL game between North Melbourne and St Kilda at Marvel Stadium on Sunday 22 March 2020.

It took Sam a while to get into the game as he and Ian Burrows had none of the play in the first quarter.  His first decision in AFL football occurred in the 2nd quarter with a boundary throw in about 48 metres from goal, as a result of a pretty straight forward spoil over the line.

Sam reflected on there being no crowds for his first game, “Yeah it’s very different. I’ve umpired VFL curtain raisers before at Marvel where there is pretty much no one in the crowd for a half or even Under 18 championship games with no one there, so l had experienced that aspect before.  Probably the last 5 minutes of the game was when you noticed no one was there as North Melbourne came from behind and took the lead and held onto a 2-point win.”

Now that round one is behind him, Sam is like all other AFL umpires and is training alone. He says it is all about being self-motivated and maintaining your fitness so when we do resume l am ready to go.  With this in mind, Sam is trying to keep his training the same or similar throughout the week as if he was in-season with the exception of no games at the weekend.

Sam has enjoyed a number of games leading up to his AFL debut.  His first VFL game, first final, first grand final, then of course his first AFL game. However, if he had to pick one he felt the 2018 Preliminary Final between Williamstown and Box Hill would be his favourite with Box Hill sneaking home by one point.

One of his funnier moments in football was back in Bendigo when he was umpiring a match between Sandhurst and Maryborough at QEO Oval. Sam had made a tough call right in front of the grandstand and a Maryborough player didn’t agree with him and let him know about it.  One of the Sandhurst players who he knew came up and bumped the Maryborough player telling him to “Leave him alone, he’s the best boundary umpire in Bendigo mate, l am sure it’s the right call.”

Sam loves being involved in football and being so close to the action.  With an AFL career ahead of him, there is one thing that is certain in these uncertain times – he will see plenty of action in the years ahead once footy is back on the park.  Congratulations Sam and best wishes for a great career ahead.