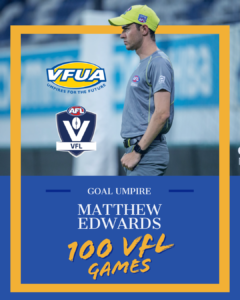 Matt joined the VFL in 2012 and later went onto make his debut in senior footy in 2014 when Coburg played Werribee at Piranha Park. Matt comes from an umpiring family with his father being a 300 game legend of the Diamond Valley League , and brother Jack also completing 100 VFL games either side of a stint at the AFL. Matt credits both his father and brother’s involvements in the game as a catalyst for getting him involved, and also notes the first senior game that he did with Jack at the VFL as being one of the favourite moments of his career.

A career that has included the 2016 TAC Cup GF, the 2017 VFL Dev League GF and being involved in AFLW the past 2 seasons which culminated in being the emergency for this years decider between Adelaide and Brisbane indicates a career to this point of consistency and solid performances week to week. When pressed for his favourite moment he said that there were too many to mention, but did point out his involvement in the numerous grand finals as being a highlight, and also being able to share his 100th game with his family in the rooms post match.

When asked if he has a favourite ground to umpire at he was adamant that ETU Stadium would be his favourite by the length of the Flemington straight. Contrary to this he would have to say that the Downer Oval would have to be his least favourite and one that he had managed to avoid for two years. This statement confused the author of this article especially considering that his requested game happened to be a night game at Williamstown and the last time Matt had done a night game at Williamstown game there was a torrential downpour. Thankfully for Matt and the author Williamstown managed to produce one of its more pleasant evenings.

Congratulations again Matt on the achievement of 100 VFL senior games!!!