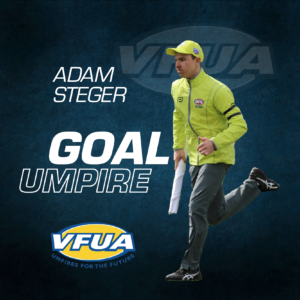 First started umpiring with?
WRFL in 2012
What made you take up umpiring?
To stay involved with football after I quit playing. Also good way to earn some pocket money!
Career highs or lows?
Career high would have to be umpiring my first AFLW game this year! Career low would be getting my dates mixed up and not turning up to a game.
Most memorable umpiring moment
First Division 1 SNR GF at the WRFL. First time I had umpired in front of a decent sized crowd!
Most forgettable umpiring moment
Probably rocking up to a game with dirty boots.
Most influential coach/mentor in umpiring?
Paul Battaglia from the WRFL, with over 400 DIV 1 SNR games, he took me under his wing and showed me how to improve to get me to where I am today.
Best advice given to you early on in your career?
Be a sponge. Absorb any advice anyone gives you.
Most influential fellow umpiring peer?
Not sure, everyone is influential in their own way.
What do you like most about being an umpire?
Having a front row seat
Favourite sport besides footy?
Tough. Either Motorsport (F1 & Supercars) or Cricket!
What’s your best sporting experience outside of footy?
Winning a Cricket Senior Grand Final.
Favourite food?
Comfortably a Parma
Favourite movie?
Rush
Favourite artist/band?
Morgan Wallen or Kygo
3 people you’d like to have dinner with
Razor Ray, Steve Smith, Daniel Ricciardo
Favourite holiday destination
Queensland, love going up there to see family